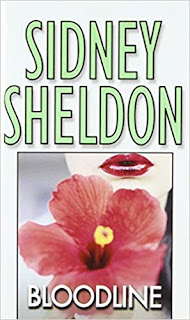 My husband brought this book home from work - he won it in a white elephant game they played.  He told me that his co-workers said it was based on the Roche family (the company he works for), so he thought I might want to read it.

The story is of Roffe and Sons - a family run drug company empire.  Sam Roffe - the wealthiest man in the world - has just been killed in a mysterious accident.  His only living child - a daughter - is now in charge of his billion dollar company.  The other board members - all family - want Elizabeth Roffe to step aside, make the company publicly traded, and ride off into the sunset with more money than she could ever spend.  However - Elizabeth receives a mysterious envelope full of information from her dad that tells her that she should not make her dad's company public.

Now an assassin seems to be after Elizabeth and it comes to light that her dad was murdered - it wasn't an accident after all.  Elizabeth and the police try to piece together who would be trying to kill her - and all fingers point to the family members on the board.  Each of them has their own desperate reason for wanting to cash in their stock and the only way to do that is to get Elizabeth out of the way.

This book was fine.  Not something I would normally read - it was a bit cheesy.  It makes a good airplane/beach read for sure.  And for goodness sakes - I surely hope this isn't based on the real Roche family.  Murder, mistresses, gambling problems.....let's hope that it isn't true.  I think that it was just the background setting for the author because Roffe and Rons is located in Switzerland just like Roche the drug company is.  And Roche is a family run business.  And I think that is where the similarities end.