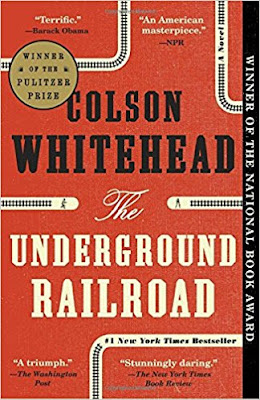 This is the story of a slave named Cora.  Cora is a young woman working on a cotton plantation in the south.  Her life is hard and her master is brutal.  One night, a fellow slave comes to her, and asks her to escape with him on the Underground Railroad.  She agrees.  They get as far as South Carolina where she spends 10 months before she is discovered and turned in.  On her return to the south, a group of freed slaves come upon her captors and free her.  She goes to Indiana to a farm to work as a freed slave.  Unfortunately, this farm is burned and she is on the run again - looking for a place where she can finally be free of hatred.

This book was.....fine.  I wanted to like it a lot more than I did.  There were many many parts that I enjoyed.  It is gut wrenching what the slaves had to endure.  Just sickening.  But the book overall was a mass of confusion.  I had a hard time following it.  There were many sections of the book that had minor characters that didn't add to the story - just added more confusion.  And I know this is historical fiction, but an Underground Railroad that was actually a railroad?  With a train?  Come on.  It takes away, in my opinion, what the underground railroad really was and how it worked.  People certainly didn't move quickly to escape slavery, and this author made it out to be a fast moving train that got people out quickly.

I have a hard time recommending it, and a hard time not.  I think there is enough information about slavery that, especially in today's climate, would be important to shed light on.  If you can look past the utterly fictional parts of this book, then you might enjoy it.

Stars: 3
Posted by PletcherFamily at 8:22 PM