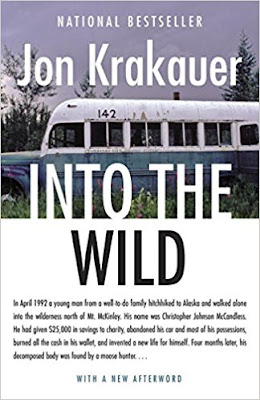 This is the true account of the demise of Chris McCandless.  In 1992 McCandless hitchhikes across America to Alaska.  He had donated all of his savings (around $25,000) and his meager possessions before disappearing.  His parents had no idea where he had gone, and never saw him alive again.  The author retraced the story to try and figure out where Chris had been and how he died.  Chris' body had been found 4 months after he went into the Alaska wilderness to "live off the land".  He had died of what looked like starvation.  Krakauer had interviewed several of the people McCandless had hitchhiked with, worked for, and met along his journey to Alaska.  Everyone Krakauer interviewed found Chris a wonderful and likable guy.  But mistakes , arrogance, and being ill-prepared for Alaska caused his death.

This was a great book.  I like Krakauer as an author (I read Into Thin Air by him as well) and I think he is an excellent writer.  He tirelessly finds everyone who McCandless had met along his 2 year journey to "find himself" and looks for the real reason McCandless died.  We found out in the book that it isn't what was originally thought.