Read The World - Belarus - Voices From Chernobyl: The Oral History of a Nuclear Disaster

Book: Voices From Chernobyl: The Oral History of a Nuclear Disaster
Author: Svetlana Alexievich
Pages: 240
Book takes place in the country: YES
Author is from the country: YES
I have visited: NO 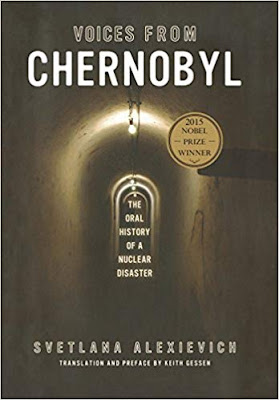 Even though Chernobyl happened in the 1980s, I really didn't know that much about it.  Or at least -remembered that much beyond the headlines.  It was only 11 years old when it happened, so it wouldn't have been something that my parents would have talked to me about extensively.  I was glad I found this book and heard some first hand accounts of the accident.

In the early hours of April 26, 1986, a Nuclear Power plant explosion left toxic radiation in the air.  It only immediately kills one person, but as the days and weeks pass, most of the people who were at the plant that night die horrible deaths from radiation poisoning.  As the years passed, and the government continued to say they had it all under control, it has been proven that it affected many more people than originally reported.  And it continues to have lasting effects 30 years later.

This book is full of first hand accounts of people who lived through the situation.  Women who lost their husbands who were at the plant that day - how they watched them burn from the inside out, slowly over weeks.  People who have had babies with series medical problems.  People who have had cancers of all types due to the high amount of radiation in the air.

It is hard to imagine what it has been like for the people of Chernobyl all of these years.  Generations of people who are still seeing the lasting effects of that horrible day.

The stories are word for word recounts.  People in their own words describing their loved ones who got sick, or the government that tried to hide the problem, or their confusion on something they can't see but that is slowing killing them.  It was worth the read, and I am glad to know more about the situation.

Posted by PletcherFamily at 10:41 AM