Top Ten Tuesdays - by The Artsy Reader - is a fun little game to play.  This week is to name 10 top books from your favorite Genre.

My favorite genre is Dystopian Future.  So here are some of my favorite reads:

- yes, I have listed this one before.  Several times.  But it remains a favorite book of mine, and happens to be Dystopian, so I am going with it.  I have seen the mini series, and I hear there is talk of it being remade, which would be amazing.

- A patient escapes from a biological testing facility, unknowingly carrying a deadly super flu that wipes out most of the population within a few weeks.  Those who are left are looking for someone to lead them.  One on side is Mother Abigail - a 108 year old woman who urges the people to build a community in Colorado.  The other side is Randall Flagg - who sets up in Las Vegas.  As these two gather followers the survivors have to chose between them, and seal the fate of humanity.

- another past listed book.  Have you read this one?  I am thinking most people have.  I have read it a couple of times, and have seen the movies, and it still remains one of my favorites.

- Panem - the future of North America - has a shining capitol and 12 surrounding districts.  The districts had long ago waged war on the capitol.  And lost.  As part of the loss, the districts must send one boy and one girl into "The Hunger Games" each year to fight to the death.  Only one victor may remain standing.

Katniss takes the place of her little sister in The Hunger Games as a volunteer.  She cannot let her 13 year old sister enter the games.  She and Peeta - the boy from her district - are left in the hands of their mentor, Haymich, (a long time drunk) to keep them alive in the arena.  Katniss and Peeta are from the poorest of the distrcits, and no one usually returns from District 12.  Katniss - an experiences hunter and Peeta - a soft baker's boy, are an unlikely team.  But Katniss is determined to return to her sister and mother alive. 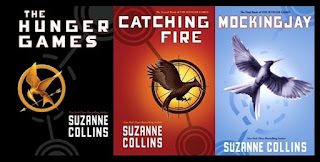 - I read this one a few years ago, and loved this trilogy.  It is about a 16 year old girl named Cia. who hopes she is chosen for The Testing which is where the best students become the leaders of the post-war civilization.  After Cia is chosen, her dad tells her what The Testing is really like and warns her to trust no one. 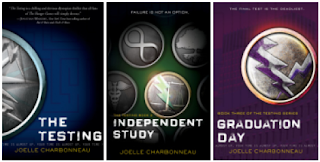 - I read this one just last year.  It was recommended to me by a friend, and when I found out it was a trilogy, I read all three.  In the future where the air is toxic, people live in an underground Silo.  There are 1000s of them in this society, and they have never gone outside.  Well - that is unless they break the law.  If you break a law and you are found guilty, the punishment is death by going outside.  Our heroine, Juliette, becomes the Sheriff, and she finds out exactly what is going on inside this Silo, and starts to discover the secrets that brought them to their underground world. 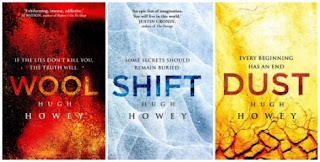 - this one is a bit older, but still remains one of my favorites.  This trilogy starts in what seems to be a Utopia.  In this society, you are matched with who you will marry, your job is decided for you, as well as your death.  No one gets sick, and everyone lives to exactly the same age.  Cassia is matched with her best friend, but when she goes to look at her matched chip on her computer screen, the face of another boy flashes in front of her.  Her choice has not been made unclear.  Is she supposed to be matched with Xander -whom she has known her whole life, or Ky - the boy whose face appeared out of nowhere? What comes next is Cassia discovering that the world she lives in isn't as perfect as it seems. 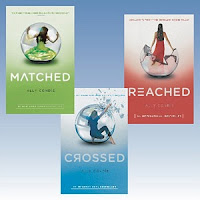 - This book takes place after America has a second Civil War.  The Pro-Choice and Pro-Life groups come to an agreement.  Children cannot be touched from conception until the age of 13.  But between the ages of 13-18 a parent may chose to get rid of a child through a process called "Unwinding".  The child's life doesn't "technically" end, but the child is taken for his/her organs to be transplanted into various recipients.  The book follows runaway Unwinds who try to escape the system.

- There have been 4 waves of attacks, and the world is down to the last few people alive.  Cassie, is on the run from the aliens who only look human.  When Cassie is injured, a boy named Evan Walker takes her in and heals her.  Cassie thinks he might be her only hope in finding her little brother.  When Cassie finds out that Evan is "one of them" she doesn't know if she can trust him.  But he is dfferent - not like the others who have wiped out billions of people.  Together, they decide to fight back. 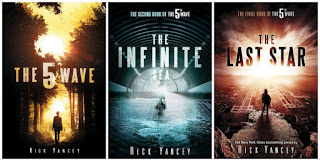 - New York City has been decimated by war and a plague, and most of civilization has been forced underground where the life expectancy is no more than into the 20s.  Deuce, when she turns 15, becomes a huntress.  She is paired with Fade who actually lived above ground as a boy.  The underground monsters (the Freaks) have been growing stronger, and destroying underground Enclaves.  Duce and Fade try to warn the elders, but they refuse to listen and instead, exile them to Topside.  Now they must learn to survive above ground among a few dangerous gangs. 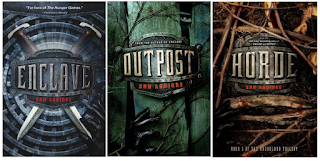 Penryn and The End of Days

- Angels of the apocolypse have decended onto the earth to demolish it.  When warrior angels fly off with a 17 year old girl, her sister - Penryn - will do anything to get her back.  This includes making a deal with Raffe and injured angel.  They journey to the angels strong hold where Penryn is determined to find her sister and Raffe puts himself at the mercy of his greatest enemies.

- another Neil Shusterman series!  This one I just read last year.  There is one more book to come out in this series, and it will be released in November.  I cannot wait.

- In this world there is no war, no disease, no hunger, no misery.  Humanity has conquered it all - including death.  People can live forever, or not.  It is up to the Scythe.  Scythes are commanded to take life to keep population under control.  The Scythes are chosen - sometimes against their will.  Citra and Rowan are chosen, but neither wants it.  They must now master the art of taking a life. 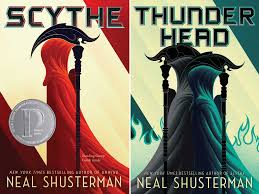 That is my list!  I could go on and on.  What is your favorite genre?