Extra Book - Sold On A Monday

Book: Sold On A Monday 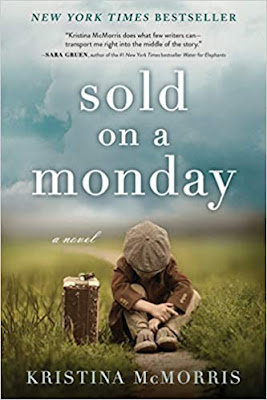 This is my 101st read for the year.
I| listened to this as an audio book.
Struggling reporter Ellis Reed needs a break.  While out one day, he sees two boys sitting with a sign that said "Children for Sale".  He snaps a picture of them never imagining it would take him anywhere.  When the picture is discovered it leads to his big break, and devestating consequences that take him somewhere he never thought he would be.
This was an okay book.  With 9000+ reviews on Amazon, I expected it to be spectacular.  The first part of the book is slow and disjointed from the picture and story of children who were sold in the early part of this century.  It spent a lot of time with the story of Ellis Reed, which would be fine, but that isn't what I thought the book was going to be about.  I thought it would be more of a historical reflection of children who were sold because families were too poor to care for them.
The second half of the book did pick up, but it still was a bit frustrating.  I didn't love any of the characters.  Some of the interactions seemed over the top and disjointed.  The story choppy.  This could have been so much better, in my opinion.
I would say skip it and maybe find a non fiction or a more focused historical fiction on children who were sold.
Stars: 3