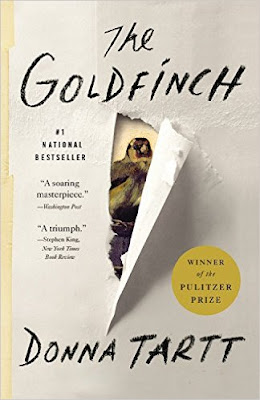 This is the story of a boy named Theo Decker.  At age 13, he survives a blast at a local NY museum that kills many people - including his mother.  He is knocked out from the blast, and when he comes to, he is near an older gentleman and young girl he had seen while he and his mother were walking around the museum.  The painting - The Goldfinch - is lying near by the gentleman, and he keeps asking Theo to remove it from site, so Theo puts it in his backpack to calm the man.  The gentleman dies from the blast, and Theo escapes the museum and heads home - painting still in tow.

His father has not been in his life in a long time (and he doesn't even know where he is), so he is taken in by a wealthy family whose son is a friend of Theo's.  He spends several months with this family, and it becomes clear that the family would like Theo to stay with them.  Just as Theo is rejoicing in the fact that he will have a loving family to care for him, his social worker finds his father, and his father - and his new wife - come to get him.  He is pulled from the home of his friend and moved to Las Vegas with a father and step mother who are drug addicts and drunks.  He friends a boy his age named Boris, and soon Theo is spiraling down the path of drugs and alcohol himself.  He spends a year in Las Vegas before his father is killed in a car accident.  He decides then it is time to return to New York and find the family who took him in after his mother's death.

What he finds when he returns is that the father of that family has had a mental break, so instead, he seeks out the shop where the gentleman at the museum worked.  He finds his partner, Hobi, and Hobi chooses to take him in and raise him.

The book then jumps 8 years into the future.  Theo has been working with Hobi in his antiques shop.  He is engaged to be married.  He has tried to get clean, but has been unsuccessful.  People from his past come back into his life, and the painting - The Goldfinch - is still in his possession.   Theo's past catches up with him and puts him in a dangerous position in the world of stolen art.

I really enjoyed this book.  It is very large, so I was reading it while I was reading a few others.  I had been putting it off (I even originally had it on my 2015 challenge book list, but took it off) due to its size.  I found myself being drawn into this book due to the amount of time that passes in Theo's life during the course of it.  He was a young, 13 year old who lost his mother, had no contact with his father and no other family.  I cannot imagine a child being in this position and having to go into the foster care system because there is no family to care for them.  Then his drug addict father turns up and carts him across the country away from everything he has ever known, and this atmosphere becomes the worst thing that ever happens to Theo.  You wonder what his life would have been like if he could have stayed with the stable family he was put with after his mother died.  And even when his father dies, and he leaves Las Vegas, and moves back to NY - he cannot get himself straightened out.  He pines after a girl he cannot have, and becomes engaged to a girl he does not love.  The person he became in Las Vegas becomes the person he is for the rest of his life - a drug addict who lies to people about the antiques he sells, and still has a priceless painting from the museum in his possession because he cannot part with it.  Then when a friend from Las Vegas comes back into his life when he is in his 20s, he spirals even further out of control.

By the time we get to the end of the book, you are feeling pretty hopeless about Theo's future.  But it does wrap up nicely, and the "moral" of the book comes out in the end.  Bottom line "Things would have turned out better if she would have lived" is what Theo tells us in the end.  And I can imagine that would be true.

Take a chance on this book.  It really was very good.  I would give it 5 Stars, but there were places in the book that I felt it dragged a bit - too wordy.