Tomorrow When The War Began 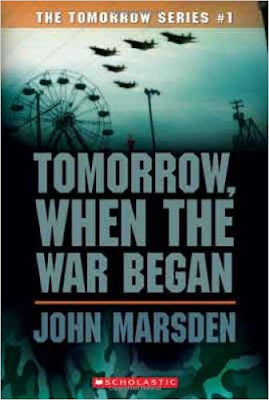 This was under the category:  A Book Published The Year You Graduated (for me it was year 1993)

This book takes place in Australia.  It is about a group of teens that take a week long trip in the summer before school starts.  They return from their trip to find their houses empty, their parents/families missing, and no power.  They soon realize that their country has been invaded and the entire town has been captured and is being held hostage.  Ellie - the main character - and her friends decide to return to their hideout where they were camping and figure out how they are going to react to the new situation.  They need to decide if they are going to hide and wait or fight.

This book was - DUMB.  Really really dumb.  I was disappointed.  It has gotten a lot of 5 star reviews on Amazon, and I had heard of it before, so I thought - why not.  It is definitely for the pre-teen/young teenager readers.  But that isn't what made it dumb.  IT was the writing.  This guy is a horrible writer and I am trying to figure out how people gave this 5 stars.  The story doesn't go anywhere.  It is a 300 page book, and yet the bad guys don't really do much, and the teenagers do even less (besides lay around, kiss, and hunt for food).  The further I got into it, the quicker I wanted it to be over.  I was actually relieved when it ended.