Today's Book Review is for: 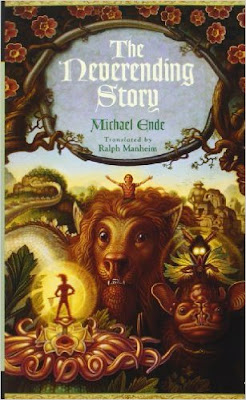 This was under the category:  A  Book With A Magical Creature

This is the story of a boy named Bastian.  His mother has died, his father barely talks to him, and he doesn't have many friends.  One day, on his way to school, he stops in a book store and finds a book titled "The Never Ending Story".  He steals the book, runs to the attic in his school, and begins to read.  He enters a world named Fantastica.  Fantastica is in trouble - the Childlike Empress needs a new name, and unless she gets one, Fantastica will be swallowed up by the Nothing.  A young hero, named Atrayu, goes on a quest for the empress to stop the Nothing and find someone to give the empress her new name.  In the end it is Bastian that must save Fantastica but he isn't sure how.

I have watched the movie The Neverending Story a few times.  The first 180 pages or so covers that movie, so I was a little curious to see where the story was going to go once the credits rolled.  I was pleased that for the most part, the movie followed the first part of the book.  I know they made a second movie, but I have never seen it, and I am not sure if it picked up where the first ended.

Never the less, the book was pretty good.  The story got a little lost in parts.  Bastian enters Fantastica after he gives the empress her new name, and he tries to become Emperor himself.  He becomes spoiled, and unruly until he turns his only friends in Fantastica away from him.  He starts to forget who he was and where he came from.  The more wishes he makes, the more he loses of himself.  In the end, he doesn't even remember his name.  His friends come to his rescue to get him back home.

I suggest reading it.  It has its moments where I rolled my eyes and thought "really?"  but most books do.  This is a good book for kids as well - whether to read it to them, or - if a little older - for them to read themselves.  The main character is around 12 years old, so kids could relate to his trials and triumphs.