The Girl You Left Behind 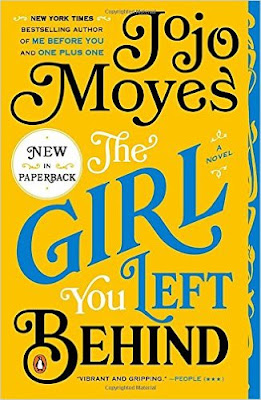 This was under the category:  A Book About Women In War

This is the story of Sophie Lefrevre during World War I.  The Germans have invaded France, and her husband has been taken off to fight.  She moves to a small town to help her sister and her sister's children and run their families hotel and restaurant.  The German Kommandant has taken a liking to Sophie and a painting she has kept in her house.  It is a painting her husband - an artist - did of her before he left.  She goes down a dangerous road with this Kommandant in the hopes she can save her husband, and it leads to her being sent away from her sister.

The other main character in this story is Liv Halston.  In Liv's house hangs this painting of Sophie.  She and her husband bought it while on their honeymoon.  Now that Liv's husband has past away, she has become attached to the one last thing that reminds her of her husband.  It has been several years since he has done, and a chance meeting of a new guy who brought life to Liv once again leads to trouble with the painting.

This book has its good parts, but the parts with Liv just drove me crazy.  The story of WWI and Sophie and her family and their struggles to survive while the Germans were stripping them of everything they own, was well told and intriguing.  The story of Liv just didn't make much sense.  She was extremely attached to this painting and when the family comes looking for it - because it was thought to be stolen by the Germans in 1919 - she has a fit and doesn't want to give it up.  She ends up having to sell her house and uses almost all of her money over a painting she bought for $300 10 years ago.

While I understood in the end a BIT where she was coming from, the reality of this is - if you have a painting in your house that was stolen by Germans from people who were held captive and you had a chance to give it back.....you give it back.  This part of the story just made me roll my eyes one too many times to make me recommend this book.  IT is a shame, really, because like I said - the parts about Sophie were really good.