The Ocean At The End of The Lane 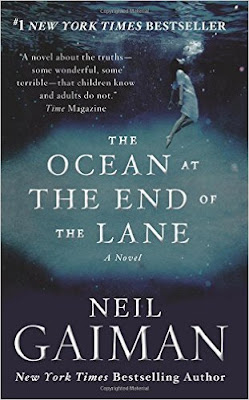 This was under the category: A Book By An Author I Have Never Read Before

This is the story of a little boy (who is never named) who lived with his parents and sister in the country.  One day, a man who had been renting a room at his family's house was found dead at the end of their road.  While the police investigate the case, a younger girl named Lettie offers to take the boy back to her house and keep him company.  While at her farmhouse, he meets Lettie's mother and grandmother and thus begins a fantastic fairytale.  Lettie takes the boy on a walk, and insists she hold his hand, but when he lets go, a "othe world being" takes hold of him and Lettie and her family must work to get this being back where she belongs.  The boy soon discovers that Lettie and her family are immortals disguised as humans and whose lake behind their house becomes an Ocean that heals when needed.

This was a great book.  I have never read anything about Neil Gaiman, and hadn't heard of him until my husband pulled 3 books of his off his book shelf.  He is one of his favorite authors and I can see why.  This is a short book compared to some that my husband showed me, but it covered the story beautifully in that short time period.

It only took me a day to read this book, but that was mostly because I enjoyed the story and wanted to know where it was going.  I didn't realize the little boy was never named until I got to the end of the book and started to look for his name for this blog post.  The boy, when he left the house after the being was put back where they belong, was made to forget why he was ever at Lettie's house in the first place.  And when he returns 40 years later, some memories return, only to be swept away again as he drives away from their house for the last time.

I recommend this book.  It was captivating.