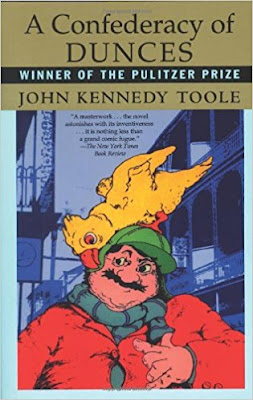 **True confessions - I listened to this book as an audiobook

Our main character's name is Ignatius Reilly who is a 30 year old who lives at home with his mother in New Orleans.  He doesn't work, but after a run in with the law, his mother forces him to leave the house and look for a job.  Ignatius is self centered and delusional, and gives his mother a million excuses on why he cannot get a job, or even why he can't go for an interview for a job.  He is nothing better than a lazy-man child that a reader will love to hate.

This book was....weird.  I didn't find it particularly funny - even though it is advertised as such.  The characters were odd, and there is no way to like Ignatius even a little bit (although, I am thinking we as readers never really are supposed to).  But I just kind of listened, and rolled along with the story, but never became fully invested in the book.

I finished the book, but I don't recommend it.  It seemed like a repetitive Vaudeville act - not going anywhere.  In my opinion - not worth the time.

Stars: 2
Posted by PletcherFamily at 7:35 PM