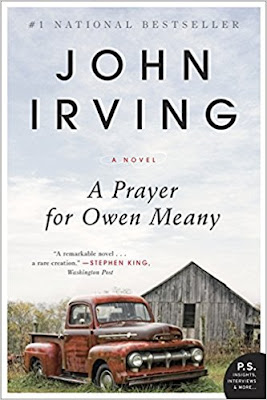 This is the story of a boy who was born different.  Owen was born tiny, with a strange voice, and a funny walk.  He never grew to be bigger than 5 feet tall.  His best friend, John, and he spent their lives looking out for each other.  Owen was a firm believer in God and stated to anyone who would listen that he was "God's instrument".  He had a dream that told him when and how he was going to die, and he was at peace with it.

John grew up under the watchful eye of his rich grandmother.  His mom had never told John who his father was - telling him she would let him know when he was old enough to understand.  Then John's mother is killed in an unusual accident, he is left to figure out who his father is on his own.

The story travels through John and Owen's childhood and early adulthood.  The story flips between John and Owen's early life to John's middle aged years.  He tells the story as he remembers his best friend and how Owen gave him his faith in God.

This was a really good book.  I have seen the movie "Simon Birch" which this book is based on.  I re-watched it after reading this, and it follows the book pretty closely - for awhile.  Owen doesn't make it past being a young boy in the movie, where in the book he lives into adulthood.

The book is quite long, but it never felt boring.  It flowed well.  The banter back and forth between John and Owen will make you chuckle.  The characters you are supposed to like - you really do.  Even the saucy old grandmother grows on you after awhile.  It is interesting to see how Owen shaped John's life choices - long after Owen had died.

I highly recommend it.  It will take you a bit to get through it, but it will be worth it in the end.