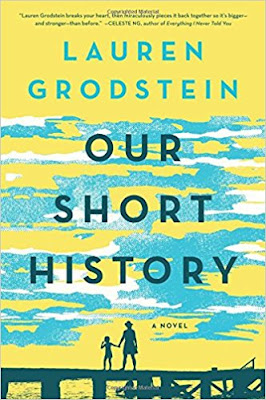 This is a story about a woman named Karen Neulander.  2 years ago she was diagnosed with Stage IV ovarian cancer and was given 3-5 years to live.  She is a single mother living in NYC with a six year old son, Jacob.  Jacob has never met his father and his father doesn't know he exists.  When Karen told Jacob's father she was pregnant all those years ago, he told her he didn't want to be a father.  Karen left the relationship never revealing that she had a son.
Now she is dying and Jacob wants to meet him.  So Karen calls Jacob's father - Dave - and tells him about Jacob.  Dave is overwhelmed and wants to be part of Jacob's life.  Karen is stunned - she didn't think he would want to be involved.

Dave and Jacob meet and have an instant connection.  Dave is now married and settled and wants to be a part of Jacob's life.  Karen fears that Dave will try and take Jacob from her, and she makes her sister promise that won't happen after she is gone.  Her sister encourages her to let Dave and Jacob have this relationship, but Karen lets past hurt feelings get in the way.

This book was....fine.  Not great, and not terrible.  I read it quickly.  I liked parts of the story, but it moved kind of quickly, and none of the characters were ever developed much.  Honestly - Karen seemed like an irrational crazy person most of the time.  Her feelings about Dave and Jacob's relationship didn't make any sense.  She was overly mad at Dave even though he never knew she kept the baby.  It was HER fault he wasn't part of Jacob's life, yet she kept playing the victim in the relationship.  It just was ridiculous.  And Jacob - not a likable little kid.  Hard to get attached to him at all - he was just a brat the entire book.

I don't recommend it.  It was fine, but kind of a waste.  It ended abruptly with no real direction, so I say skip it.

Posted by PletcherFamily at 10:43 PM