Almost the end of another month! 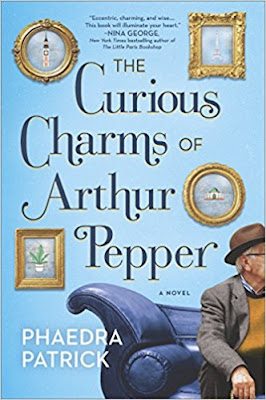 This is the story of Arthur Pepper.  He is a recent widow.  The story opens 1 year after his wife has died of pneumonia, and he is still mourning her loss.  He keeps to himself, and doesn't stray from his daily routines, even though she is gone.  He is estranged from his two children, and barely leaves the house.

His daughter finally convinces him that a year is long enough and Arthur needs to pack up his wife's things and donate them.  When he starts to pack up her things, he finds a charm bracelet he has never seen before.  It has eight charms, and as he studies it, he sees that one charm - an elephant - has a phone number on it.  He calls them number and this starts his journey to discover that his wife had an entire life he didn't know about before they were married.  His journey takes him to India, London, France - just to name a few.  Along the way he meets interesting people and does things he would never had done if he had not found the bracelet.  He becomes a completely different person and learns to live again.

This was a really sweet book.  It is an easy read, and all of the characters were very likable.  I had a hard time putting it down - wondering where the next charm would lead Arthur and what he would find out about his wife.

I am sure there are many of us that had lives before we met our significant others.  Things that we don't readily share with others.  Why Arthur's wife chose to leave her past in the past and not share them with her husband of 40 years never really becomes clear.  Maybe she felt it wasn't important.  Maybe she was embarrassed.  But whatever the reason - she held the secrets close to her chest.