I took a break from the heavy novel I am reading right now to read Bird Box.  This book has been turned into a movie (coming out this month on Netflix) and it looked interesting, so I thought - why not? 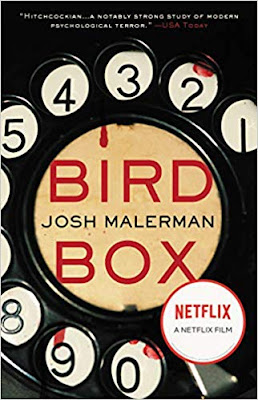 This is the story of a world thrown into madness by an unknown/unscene entity.  If people look upon this entity they are said to witness something that drives them mad and drives them to kill themselves.  Soon, people are shutting themselves indoors, darkening their windows, and blindfolding their eyes if they dare venture outside.

Malorie cannot believe what is happening.  She is 20 years old and has just found she is pregnant.  She and her sister and trying to decide how to tell her parents when the madness begins.  Malorie's sister succums to the entity and Marlorie is left alone.  In desparation, she answers an add in the paper about a safe house.  She is welcomed in, and learns to live in total darkness with a set of strangers.  As the day of her delivery looms, Malorie wonders how she and her child will ever survive what is happening in the ouside world.

The book jumps back and forth between the when the madness began and 4 years in the future when Malorie and her children decide they can no long stay put.  It bleeds the timelines together to solving how Marlorie ended up alone with two children, what happened to her housemates, and why she feels she must leave.  Trusting that her young children will get them all to safety with "hearing training" Malorie has done wiht them since they were babies, she sets out on a dangerous trip - completely blindfolded - to find safety.

This wasn't a bad book.  It reads so quickly that I read it all in one day.  I, honestly, didn't want to put it down because I was curious on how it was going to end.  It is an intense, nail biting novel with one horror after another.  I found it on the leves of Stephen King and M. Night Shyamalan.  Where it differed was the ending.  IT wrapped up pretty quickly AND didn't really solve how they were going to deal with the entities.  People were trying to rebuild in the end, BUT the don't fight back against the invaders how you would expect.  I found it a bit wanting.  I think if it would have actually been a little longer, it could have developed some of the characters and filled in some of the plot holes a little better.

If you are interested in seeing the movie, check out this fast read first.  It is really nail biting, so if horror and suspsense are not your thing - this book isn't for you.