Last book of the year.  I wanted to get this one in because it is something I am reading for my book club, and we are reviewing it January 10th.  Tomorrow I start my new reading challenge, so this is it for 2018.  118 books - a new record for me.  (plus I read 15 books to my two 12 year olds this year as well).  Looking forward to starting over again. 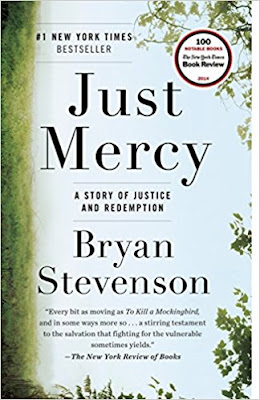 This is a non-fiction story of Mr. Stevenson and his work to get people off of death row.  He started a non profit in Alabama to help people who had been imprisoned for a variety of reasons, but some of them innocent of their crimes.

The majority of the story is about Walter McMillian who was put on death row for a crime he didn't commit.  There were mounds and mounds of evidence to prove he didn't commit the crime, but Walter spent years in prison until Bryan came along to help.  Mr. Stevenson gets tangled in conspiracies, and political underhandedness while trying to set Walter free.

The story always intertwines other cases that Mr. Stevenson tried, and also stories in general of even 12-13 year old children going to prison for life without parole and being placed in an adult system.  It opens your eyes to a broken prison system and shows how far we still have to go.

This was a fantastic book.  I didn't want to put the book down.  I was enthralled with reading all of the cases that Mr. Stevenson was involved in, but even more that he wasn't.  I had no idea that they sent young teenage children to adult prison and how scary that must be for a child.  And what it would do for them long term if they were ever released.

The story of Walter is almost unbelievable - how a man who had dozens of witnesses and were with him at the time the crime was committed is sent to prison for years and years.  If it wasn't for the perseverance of Mr. Stevenson and his non-profit, Walter would have sure been put to death.

Definitely put this book on your list.  It is well written, and a necessary story to read.

Posted by PletcherFamily at 7:35 PM