Nearing the end of 2018.  I have read more books this year than I ever have.  I can thank the Swiss Tram system for many hours of extra reading that I wouldn't have had if I was in the United States.  Having to spend at least 1 hour on the trams each day picking up my daughter from school helps. 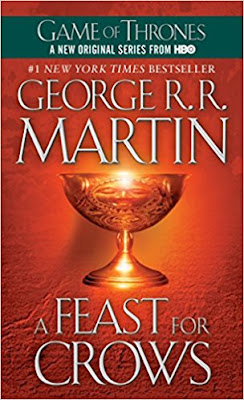 This is book 4 in the Game of Thrones book series.  King Joffrey is dead.  Cersei is now ruling the kingdoms until Tommen comes of age.  The war that raged is over.  The 7 powers seem to be at an uneasy peace.

Tommen is married to Margeary Tyrell (lake King Joffrey's wife), but Cersei is uneasy with the little queen.  She keeps Tommen close at hand becuase he is only 8 years old.  She wants it known across the lands that she is the queen regent.

Brienne has left King's Landing in search of Sansa Stark.  Sam Blackwell is heaing across the sea with Gilly and the hidden baby.  Measter Aemon is at death's door.  Jon Snow is the lord of the wall.  Jaime is off securing lands and preventing war.  Sansa is in hiding with Littlefinger and little Lord Robert.  Arya is also in hiding and learning to fight.

While Cersei is busy trying to get Margeary accused of treason, she herself doesn't realize that she is being watched.  Arya - thinking that no one she loves except Jon is alive, tries to become an unknown and learn to fight against the enemies of her past.  Sansa - trying to figure out how to keep hidden and unseen soon finds herself betrothed to someone she doesn't even know.

This book was broken into two because it is too big of a story to tell in one.  So this book only tells the tale of Cersei, Jaime, Brienne, Sansa, Sam, Aryan and a few other characters.  We don't hear from Jon Snow, or Khaleesi or Tyrion.  They are to come in the next book.

This book was a MONSTER in size!  I did read it while I was reading other things - trying to put in at least 50 pages here and there.  And then in the last week I have tried to take in around 100 pages of this book just to get it done this year.

I do love George R.R. Martin's books.  They are incredibly long and have thousans of characters and are in no way a light read.  But his writing is amazing.  His talent is unbelievable.  I do wonder what the inside of his mind must be like - because every character, even ones only mentioned once or twice, has some kind of back story.  I have a very hard time keeping everyone straight, yet he has developed this incredible world.

I don't think I will get to book 5 in the new year with my new challenge ahead.  But I may have to try and sneak it in so thatI can hear this story from the other character's point of view.  This book was filled with my least favorite characters - except Sam - so I am anxious to see what my favorites are up to.