This weekend we were supposed to be enjoing Belgium, but instead I spent the weekend with my eldest daughter in the hospital.  She had her appendix out, so instead of Christmas markets and visiting friends, I read a book in a hospital room.  Fun times. 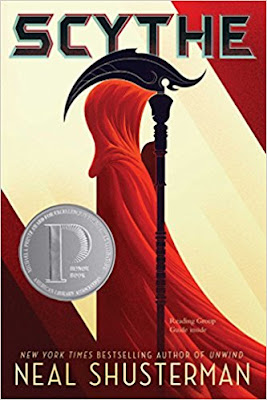 In this future, there is no war, no death, no disease, no misery.  It is a post-mortal age where you have the chance to live forever.  Scythes are the only ones who can take a life away - with an act called gleaming.  The acts are random, and up to the individual Scythe.  Scythes help keep the population under control, and everyone lives in fear that their time will soon be up.

Rowan and Citra - two 17 year old kids - have been picked to become Scythe apprentices.  Neither of them wants the job, which makes them perfect.  They will spend the next year learning how to be a Scythe and take 4 test before becoming an official Scythe.  If they fail, they will go back to their lives.  If they succeed, they will spend eternity gleaming people of their choosing - meeting their quota to keep population control.

During their time as apprentances, they find that there are all kinds of Scythes.  Those who take their job seriously and are compasionate, and those who see it as a position of power.

Rowan and Citra must learn to take life and hope that it doesn't mean the end of their own.

This was a pretty good book.  I have read Shusterman's "Unwind" series and thought it was clever.  This did not disappoint.  There are a few twists in the story that kept me moving at a quick pace to finish the book.  I wanted to find out what would happen to Citra and Rowan once they took their final test.   I also found myself going back and forth between being for or against the idea of a Scythe in the age of immortality.  You can see the need for some way to control the population, but some of the methods seemed a bit....much.

This book is listed for 7th grade and up, but if your pre-teens are not really into gore and killing in books, pass this one up.  I think it is probably better suited for high school and beyond.

There is a second book which I am starting today.  I am anxious to see where the story is going.

Stars: 4
Posted by PletcherFamily at 1:50 PM