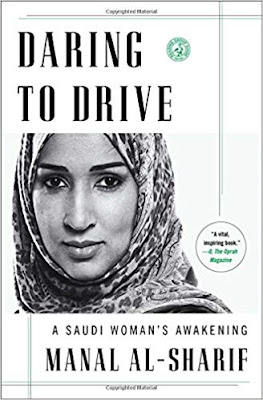 I have only been to one Middle Eastern Country - the United Arab Emirates.  It is a beautiful part of the world, and right above Saudi Arabia.  Saudi Arabia is not anywhere on my list to visit.  And after reading this book, well, it remains that way.  This book makes me realize how very small our problems we Americans (and even the Swiss) have compared to other parts of the world.  Especially as a woman.  I have NEVER had to fear what Manal had to fear.  Never.

This is the story of the author and her want to change the rules for women drivers in her country.  The book begins with her being arrested for driving on open Saudi roads.  This is something, as a woman, she is forbidden to do.  There is actually no law that women cannot drive in Saudi Arabia.  But it is a custom, and in Saudi Arabia, customs are treated like laws.  She is arrested by the Saudi religious police, and thrown in jail without a trial.

The book goes back to her childhood, and she talks about her upbringing in Mecca.  She lived within walking distance to the Grand Mosque there - where all Muslims must visit at least once in their lives as a pilgrimage.  While the Mosque is revered, Mecca is where the very poor and destitute live.  She grew up in an apartment that didn't have running water, and they barely had enough food to eat.

It wasn't until she went to college and realized she didn't want to study the "normal" women professions available to her, and studied computer science.  She got a job at the presigious Aramco company, but even there she faced restrictions.  She could not rent her own place.  She could not drive herself to and from work.  She could not dress the way she wanted at work without scutiny.

She did some traveling and her eyes were opened.  She found that women in other countries could drive themselves where they needed to go, and that is what she wanted for herself.  While she lived for a short period in the United States, she obtained a drivers license, and was determined to get one when she returned home.

She organized Women2Drive movement on facebook, and it received attention on a global scale.  It caused a lot of problems for her at work - she started getting death threats, and scathing emails about what she was doing, but she was also getting support from women who wanted to be able to drive themselves.  While they were organizing a "Drive day" Manal decided she was going to drive herself somewhere, and that is what got her arrested.  She was thrown in a jail that was full of cockroaches, not enough food, and extremely crowded conditions, and it made her even more determined to continue to work to change things.

Today, she speaks all over the world about what she accomplished and the strides she has made for Saudi Arabia.  Sadly she had to move from Saudi due to the pressure she was receiving from the public.  She now lives in Dubai with her family.

This was an excellent book.  Eye opening at the very least.  Well told, and well written.  Manal did an excellent job of telling her life story and what eventually lead her to become an activist for women's rights in Saudi Arabia.  I cannot imagine having the deal with the rules she had to follow as a woman in her own country.  The lack of freedom she had just because she was female isn't something I have ever had to deal with.  I commend her on her bravery and her efforts.  And as of 2018, the King issued a decree lifting the world's only ban on women driving in Saudi Arabia. 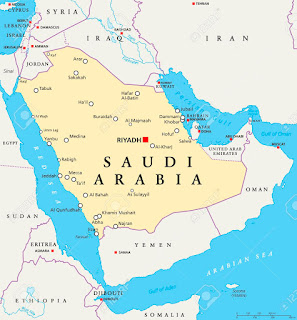