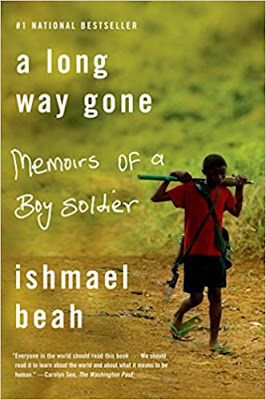 Another book that takes place in an African Country.  So many incredible stories that come out of Africa.  So many unbelieveable ones at that.  Things that we in America would never even imagine happening to us in our lifetimes, let alone as a child.

This is the author's own story.  When he was about 11 years old, the world around him changed.  War began and he had to flee his home leaving his family behind.  Fearing that they are dead, he hides in the woods, stealing food and trying to stay alive.  He finds another group of children who are also on the run, and together, they try to survive.

At the age of 12, he is picked up by rebel troops and trained to fight.  He is given an AK-47 and becomes hooked on hard drugs, and learns to kill.  For a year he is with the rebels and helps kill hundreds of people before he is finally rescued by the government army and put into a rehabilitation camp with other boys.  He has had such a hard year, the boy he was is all but gone.  What is left is a drug withdrawn, angry killer who has migraines and violent nightmares.

He rehabilitates, and the government releases him to an uncle.  The uncle's family welcomes him and gives him the love he needs to continue to heal.  Ishmael is then asked to go to the United States to talk about what it was like as a child soldier and he agrees.

When he returns to Sierra Leone, the government once again is overthrown and it becomes very unsafe once again.  His past is coming back to haunt him, and he knows he has to escape.  So he calls a woman he met in New York (who would become his adoptive mother) and asks if he can get to her, would she let him stay with her and she said yes.  So at the age of 16, he heads off to the United States to escape Sierra Leone once and for all.

I have mixed feelings about this book.  The first feeling is that this story is so unbelievable and hearrbreaking it is hard to fathom.  I cannot imagine a little boy the age of my son getting an automatic weapon and cocaine and being forced to kill people.  And then having to live with that for the rest of his life.  To hear a first hand account from someone who actually not only had to live through a terrible situation, but had to participate in it, is a lot of take in.

The book itself, though, had some short comings in my opinion.  While the information is there, the book isn't full of a lot of emotion and I didn't find it very well written.  It seemed disconnected.  The violence and discriptions of that violence are hard to read.  I am sure the writer felt it was necessary to describe, but it was cringe worthy.

The other thing I wish he would have done was talked more about his time in the United States.  The book ends with him basically getting on the plane to his new life in the US, but he never speaks of it and what it was like to adjust.  There is just a slight mention of it in the thank you section of the book where he says he went to Oberlin College.  After so much terrible, it would have been nice to hear about his "happy ending" (that that is what it truly was)

If you now know those things, but are still interested in hearing about the life of a child who was forced into war, then please read this one.  It is an eye opening book that I think a lot of people should read. 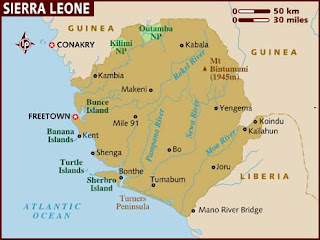