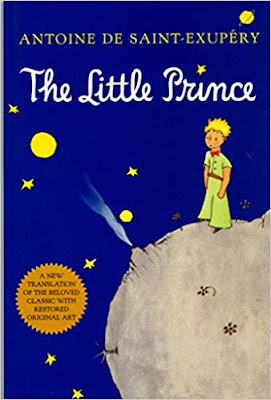 This is my 35th read of the year.  I finished this last night with my two, 12 year old children and all three of us really liked this short little book.

The narrator is a pilot who has crash landed in the Sahara Desert.  He is trying to fix his plane.  While working, a little prince approaches him and asks him to draw a picture of a sheep.  Thus starts the story between the narrator and the little prince.  The little prince tells the pilot of his journey from his own planet.  The Little Prince's planet has just him, a flower, and three volcanoes (one extinct), and nothing else.  He tells the pilot that it is so small that only he fits.

It is a remarkable little book. A beautiful story, and sweet illustrations, and a very sad yet heartfelt ending.  We all three enjoyed it, and I am so glad we finally got around to reading it.  If you have never read this book, you really need to.  It is a treasure.

Stars: 5
Posted by PletcherFamily at 6:00 AM