Book Challenge 2021: A Cover With A Woman Facing Away: Children Of Eden 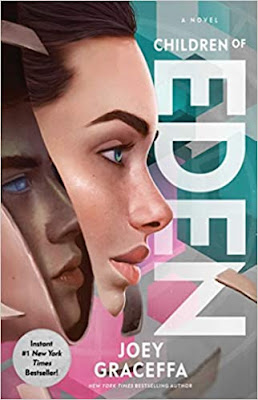 This is my 20th read for the year
If you are wondering why I have so many in a row - it is because of the beautiful world of audiobooks.  While I was finishing my Read The World challenge, I was using my car time/chore time to listen to several books. I tend to overlap a few books at a time.
This is the story or Rowan.  She is a second child in a world that does not premit second children.  For 16 years her family has hidden her away in her house while her twin brother was able to explore the world.  And even thought her brother Ash shared his days with her by describing them when he returned hom - Rowan knows it isn't the same.  One night she decides to sneak out of their walled garden and everything changes.  This decision sends Rowan on a path she never expected to be on.  And soon she discovers the secrets of her home - Eden - that she was never supposed to know.
This book wasn't that great.  I know - I have been saying that a lot lately.  Things come up on my Scribd app, and sometimes I give them a try.  My favorite genre is Dystopian.  And I am hutning for the next Hunger Games.  Or Testing Trilogy.  But I haven't found it in this one.  Why or why do authors need to make their main characters so naive.  All.the.time.  This main character is a special kind of niave.  Yes - she is supposed to be 16 and yes the author is setting her to make 16 year old impulse decisions.  But I found myself rolling my eyes so hard so many times that I just cannot count this as good literature.  It was a good book for runnig errands because it did not demand much of my attention.  Her love triangle is cliche.  There is no originality.  She has decided not to have profanity in the book, which I commend her for, but she uses one "made up swear" - Bick" - so much it gets exhausting.  I don't get it.
I would not bother with this series.  I am sorry to say that my next review is going to be for the second in this book.  I really need to start searching for better content on my Scribd app.
Stars: 2