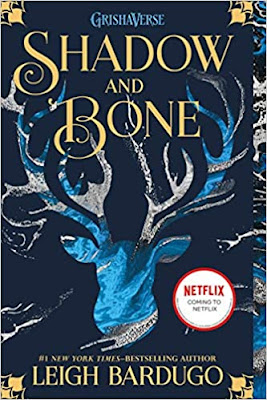 This is my 19th read for the year
This is the story of Alina Starkov - an orphan who grew up to become a soldier that needs to enter the Shadow Fold.  (darkness that is crawling with monsters) During a fight, when her best friends life was at stake, Alina unleashes magic she had no idea she had.
Now that her power has been discovered, the Darkling has come to claim her and bring her into the world of the Grisha.  She will be trained to be the Sun Summoner they were all waiting for to get rid of the Shadow Fold and free the world once and for all of the monsters that lurk there.
During her Grisha training, she learned of the Darkling's true plan and escapes to find her best friend.  She knows what she must do to protect her world (Ravka) and save everyone from the darkness.
I got this book for Christmas from my husband.  He knew they were making it into a Netflix show and thought I would like to read the book before that happened.  I read a chapter each night and was really hoping that this would be a series that I would enjoy and be excited about enough to finish the trilogy before the show came out in April.
Alas - it was not.  The book was fine, don't get me wrong.  It wasn't terrible.  It just wasn't great.  This is the author that wrote Six of Crows, so it got a lot of press.  You don't really get attached - or like - any of the characters.  The plot is just okay.  Nothing jumped out at me - it has all been done before.  And yes, I realize that because of the vast number of books I read this is something that would be hard to avoid, but still.  I won't be reading the rest.  We shall see what Netflix makes of it.
Stars: 2

Posted by PletcherFamily at 2:30 PM