The book I am going to review today is called: 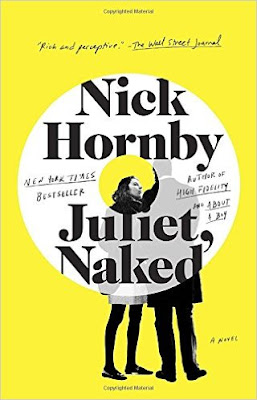 It was under the category:  A Book About Music

This book is about Annie who lives in England with her boyfriend, Duncan.  Duncan is obsessed with a recluse rock star named Tucker Crowe.  Tucker hasn't made any music in 20 years and has gone into hiding in America - according to his fans.  Duncan and Annie take a trip to America so that Duncan can stop at some famous Tucker Crowe places, and that is when Annie decides that she has had enough.  When they get back to England, Tucker Crowe's people have sent some of his biggest fans a demo CD called Juliet, Naked.  Annie listens to it, and doesn't like it.  She decides to take to the internet and post this about the album.  It leads to Tucker getting in contact with Annie which leads to life changing consequences.

This book was pretty good.  Duncan is a bit of a douche, but Annie is sweet and Tucker is very likable.  Annie starts having an online conversation with Tucker which leads to meeting face to face and finding out most of the things posted about him on the internet are untrue.  Most of this book is about regret.  Annie regrets spending 15 childless years with Duncan - whom she doesn't really love any more.  Tucker regrets not knowing his children better and making more of his life after he left the music business so long ago.  We find out the reason for his album in the first place, and it isn't what everyone thinks.  It is the same reason he went into hiding and quit the music business.

I enjoyed it.  It wasn't a hard read, and I thought the characters were easy to like.  Check it out.

Posted by PletcherFamily at 9:56 PM