Today's book I am reviewing is 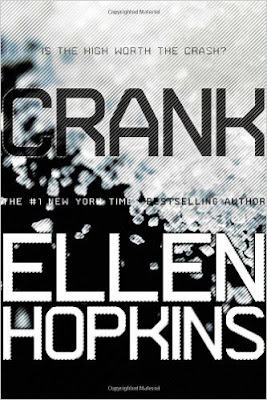 This is under the category:  A Book Involving Addiction

This book is about a young girl - named Kristina - who is introduced to crystal meth (crank) while visiting her dad (who is also a drug addict).  Before she started taking drugs she was a kid on the high honor roll with a lot of friends and a bright future.  She develops an alter ego, she calls Bree, who will do anything Kristina won't.  She becomes attracted to several dangerous boys who can help her get the drugs she craves.  She even is raped by one of them while they were both high and becomes pregnant.  Her decision to keep her baby encourages her to stop her drug addiction, but she couldn't do it.

This book was pretty intense.  But it was an easy read as well, because it was written in "poetry" form.  Meaning, there weren't many words on the page, and the words were laid out in interesting patterns to tell the story.  It was shocking how easily a young 16 year old girl fell into the wrong crowd, and started taking hard drugs, and within a year she was a completely different person.  I was hoping that once she became pregnant, she would stop because she decided to keep her baby.  But she didn't.  And the book ends with her child being 17 years old and not being in her life because she chose drugs over him.

I think in another year or two, I will share this book with my oldest daughter (who is now 13).  I think it would be a good passage way into how easy it is to fall to drugs and alcohol and who easily you can spiral out of control.