The book I am reviewing today is:  After You 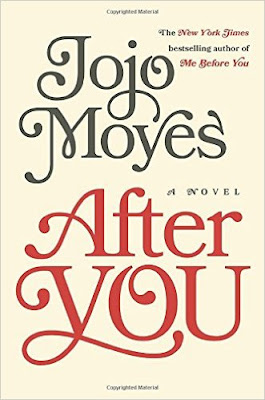 It is in the category:  A Book You Have Been Putting Off Reading

This book is a sequel to a book called Me Before You.  I read that book a year or so ago, and really enjoyed it.  This story picks up where that one left off (I highly recommend Me Before You - by the way).  Our main character - Louisa - is back after Will (her love of her life) dies.  It has been 18 months since his death, and even though she did a little traveling, and tried to make something of her life as he asked her too, she didn't get far.  Now she is working a dead end job in a bar in an airport, her parents aren't speaking to her, and she hardly ever leaves her apartment.

Then one night, while she is on her roof looking at the stars, a voice calls her name behind her, and she turns, slips, and falls.  The accident leads her to meet someone that connects her to Will, and also helps her let him go.

I thought this book was pretty good.  Not as good as the first, but close.  I thought it was written well, and was a pretty easy read.  There were parts where I wanted to shake Louisa because I felt the character was being stupider than she had to be, but those were few and far between.  I thought it was interesting that even though Louisa only knew Will for 6 months before he died, she was so in love with him that 18 months later, she was still grieving.  She didn't know how to move on.  She had never really been in love before, and instead of getting a broken heart from a first love, she watched him die.  I think she never had the closure she needed to truly be able to move on.

If you read the first book (or are willing to read that) then I suggest reading this book.  I had been putting off reading it because I wasn't sure how it would be.  Sequels are usually let downs, but in this case, I was proven wrong.  Check it out.

Stars: 4
Posted by PletcherFamily at 2:48 AM