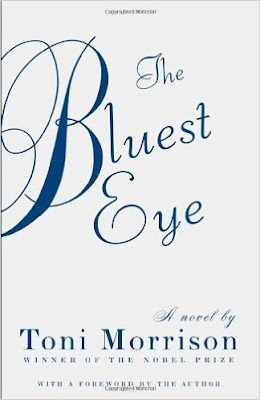 This was under the category:  an Author the same age as you.  (disclaimer - I had a hard time finding this, to be truthful.  Toni Morrison was 40 when she wrote this book, so I went with it)

This is the story of an African American girl named Pecola who just wanted to have blue eyes like the other little girls she sees.  She is a very poor girl in the 1940s with a family whose father drinks too much, and her mother is too quick to beat her over the smallest things.  The story tells of the life she has been dealt.

I liked this book okay.  It was a little hard to read.  The story was haunting, and sad, of course.  Each chapter was about a different person in the story - giving you background of how they came to be the person they were.  These were poor children in a poor neighborhood and their lives were hard.  There is a house that is burned down.  There is an unexpected pregnancy.  And all Pecola wants is blonde hair and blue eyes.

I don't really recommend it.  I mean - it is fine.  It was only 200 pages, so it only took me a few days to read it.  But I really had to make myself read it.  I think this was her first book, so to be fair, that might be part of the problem.