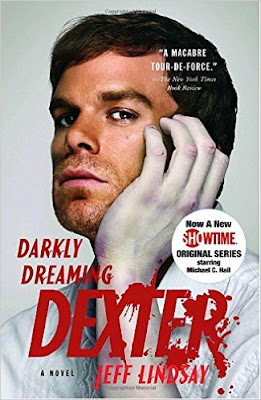 This was under the category:  A Book About An Antihero

This is the story of a man named Dexter which Amazon calls "A polite wolf in Sheep's Clothing".  He is a serial killer but he has a rule - he can only kill bad people.  He has had sometime "off" about him since he was a child and taken in by an adoptive family.  Now he works as a blood splatter expert for the police.  This position helps him identify his victims.  Now he is involved in a murder case that seems to be trying to be a copy cat of his own crimes.  As one murder proceeds another, Dexter becomes more and more involved in trying to figure out who is committing them.  He has mixed feelings - he wants to stop the killer because this person is killing innocent people.  But he is also transfixed with the details and way this killer presents his victims.

This was a pretty good story.  I had watched a few episodes of this show when it first started, and found it mildly entertaining.  So I knew what I was getting into when I picked this book.  The book - as usual - explained a lot more in detail the character and why he is the way he is.  Dexter is emotionless - he cannot feel love or empathy for others.  He never has.  But he has had great practice of "playing human" and to the public he comes off as a kind, caring, well meaning person.

I recommend this book.  Now that you know that the story is about, you can make your own decisions about reading this type of topic.  But it was told well.

Stars: 4
Posted by PletcherFamily at 4:33 AM