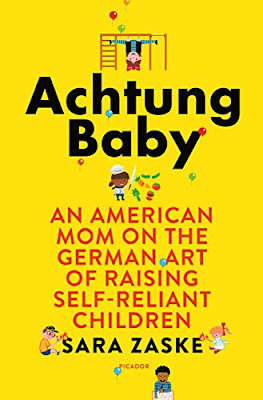 Sara tells her own story with this book about how she and her husband and young daughter move to Berlin Germany from Oregon.  Sara finds herself in a country where parents give their children a great deal of freedom - much different than she was used to in America.  Achtung (means caution in German) is how Americans react to many things their children do.  Sara sets out to discover what it is like to raise children in a culture that lets kids think and act for themselves from a very young age.  She speaks about differences in schooling, play, and freedom compared to children in America.  She finds that German parents are raising their kids to have self-reliance.  Something she feels is lacking with American parents.

I loved this book.  I was introduced to it by a friend over here where I am living in Switzerland.  My family is living in Basel which is right on the German border.  Here the Swiss speak German (although it is their own dialect) and take on many of the traits of Germans when it comes to parenting.  I was fascinated with this book because I see the exact same behaviors here in kids and adults that Sara saw in Berlin.

I have to admit I was a bit of a helicopter parent before moving to Switzerland last year.  I have a daughter that is legally blind, a teenager who I wouldn't even think of letting go to the movies alone, and an 11 year old son who I still picked out clothes for on a daily basis.  I quickly saw here that I could let go.  I was introduced to a culture where 5 year old kids walk, ride bikes, or take trams/buses to school by themselves.  I see kids playing at all hours of the day in playgrounds throughout the city and also riding their bikes after school without supervision.  My eldest daughter has been shopping in the city with friends, alone.  My legally blind daughter rides the tram to and from school each day without me as her escort.

And you know what I found?  They didn't die.  I let go, and they thrived.  I see them making more and more decisions for themselves, and not relying on me to save them when they get into a sticky situation.  (like getting lost or missing a tram).  My 11 year old son takes the tram to and from school alone each day and walks about 10 blocks from the tram to his school.  Without guidance.

Kids play outside here more.  They aren't tied to their phones or their electronics.  I don't see kids immediatetly pulling them out when they are together, or even alone on public transportation.  I see them talking and laughing with each other.  They are outside every day, no matter the temperature or the weather.  And their parents are not with them.

We could learn a lot from other cultures about making kids into strong adults.  One day - soon - I want my kids to live without me.  I want them to be able to make decisions and not crumble and ask for help.  I want them to be wordly and not sheltered.  And I am thankful for the opportunity I was given to break free of helicopter parenting and letting go.

Check out this book.  Especially my American friends.