Okay - I have been slacking off in the reading department this month.  The weather has turned beautiful, and we have gone on a vacation, and I am falling behind.  I also started a book and wasted 4 days on it before chucking it to the side, so that didn't help. 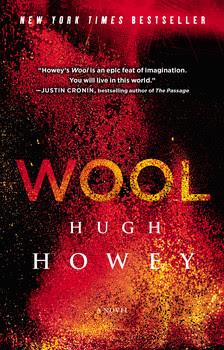 This book is set in the post-apocolyptic future where people have been driven into silos due to the air on earth becoming toxic.  The silo has 130 levels and holds thousands of people.  They have been underground for over 100 years, so the people in the silo have no idea that any other way of life.  The Silo is run by a mayor and when someone "gets a little mad" they are sent outside to a "cleaning".  These cleanings are to make the outside window of the silo clear for people to see out into the world, and at the same time - the person who is sent out, dies from the exposure to the earth.  No one has ever survived a cleaning punishment.

One day, a girl named Juliette is sent out to do a cleaning - sent out for crimes she didn't commit - and she is the first person who doesn't clean the lense.  Instead - she walks over the hill and can no longer be seen.  Her disappearance starts an uprising among the people in the silo that the people at the top are finding hard to control.  Unanswered questions about their existence start to come to the surface and secrets will be revealed.

This was a pretty good book.  Warning - it is a TRILOGY - so be prepared for a cliff hanger ending.  Most of the characters are likable.  There are parts that were a bit technical and drawn out, but overall, the story was unique.  I enjoy dystopian/post-apocolyptic future books, and this one was very different from others I have written.  I was trying to picture how the silo would work.  There was no elevator for the 130 floors - the people walked.  The people in the "down deep" didn't go to the top floors more than 1-2 times a year, and sometimes not even that often.

Check it out.  I am anxious to read the next two books to see where the story is going.

Posted by PletcherFamily at 9:58 PM