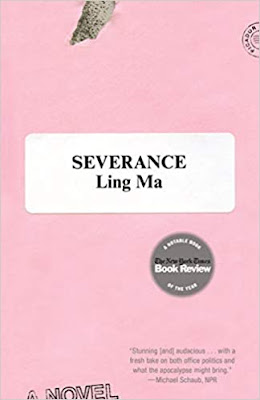 This is my 9th read for the year
While I wrap up my Read The World, I have started a challenge with a friend.  I have been able to plug away two books so far for that.  Yay me.
This is the story of a pandemic that kills off most of the world.  Shen Fever has taken the world by storm - originating in China - and spreading and turning people into minless "zombies" once the fever hits.  People have barely a warning when the become sick.  These zombies do not see to attack or are after people or brains, or the common zombie world tactics.  No - these zombies, once they get the fever, are stuck in whatever routine they were last doing.  Over and over again until they finally just waste away.
Candance, a millenial who was in an average job in New York City, is one of the last people to leave the city once the fever takes out most of the population.  The book goes back and forth between life before the pandemic and her life right after it takes out most of the population.  Candance tries to figure out where she fits in with her new group of survivors and what she needs to do to take care of herself.
This was an okay book.  Candace drove me crazy.  She was overly stubborn and did dumb things considering she wasn't a kid, but an adult.  And the way she was written seemed like the author was an antimasker.  Constantly complaining about them.  I mean - right now we are ALL complaining about them, but she took it to the next level.  The worst part of the book was the ending.  It just stops.  There is no wrap up.  No Epilogue for what happens to Candace slight in the future.  Nothing.  Just a really weird ending where it feels like the author just didn't know where to go so she just wraped up the story.
The only saving grace for me with this book was the zombie take.  Something different.  Not canibals for once.  Peaceful people that didn't try to kill anyone else.  A refreshing change.
I would skip this one, though.  I listened to it and it kept me entertained on my drives around, but it wasn't great.
Stars: 3

Posted by PletcherFamily at 10:48 PM