Read The World - Romania- The Land of Green Plums

Book: The Land of Green Plums 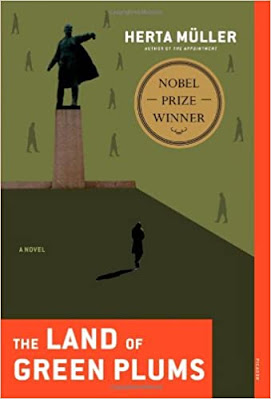 This is my 10th read of the year

Here is what Amazon has to say about this book:
Set it Romania at the height of Ceauescu's reign of terror, The Land of Green Plums tells the story of a groupd of young people who leave the impoverished province for the city in search of better prospects and camaraderie.  But their hopes are ravaged, because the city, no less than the countryside, bears everywhere the mark of the dictatorship's corrosive touch. All the narrator's friends - teachers and students of vaguely dissident allegiance - betray her, do away with themselves, or both.  As they do so, we see the way the totalitarian state comes to inhabit every human realm and how everyone, even the strongest, must either bend to the oppressors or resist them and thereby perish.
Herta Muller, herself a survivor of Ceausescu's police state, speaks from intimate experience.  Scene by scene, in language at once harsh and poetic, she constructs a devastating picture of a society and a generation ruined by fear.   In simple images of hieroglyphic power - policeman filling their pockets and mouths with green plums; girls sleeping with abattoir workers for bags of offal; a docile proletariat making things no one wants - Muller anatomizes a country and its citizens and the corruption that has rotted the core of both.

This was a pretty great book.  It took me a bit to get into it - having to turn everything off and just concenrate on reading it to follow the style of writing.  However, once I did that, I found who well this book was written and what a profound story she had to tell.  I can see why it won the Nobel Prize.  If you stick to this one, you will find an incredible story about a terrible time in Romania's history.

Posted by PletcherFamily at 11:29 PM