A new year has started, which means it is time for the 2016 book challenge!  I have been looking forward to starting the new year and the books I have on this year's list.

I started right away, and have finished my first book of the year.  I chose to start with 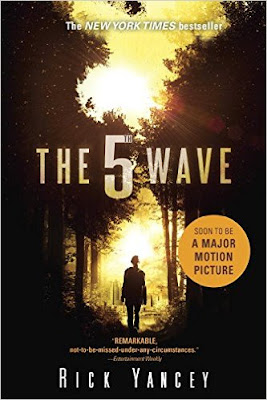 This book is under the category: A Book About an Alien Invasion

This book is about an alien invasion.  There have been 4 waves to this invasion so far:  darkness was first - all electricity was cut.  Then what followed were earthquakes and tsunamis which wiped out around 3 billion people.  The 3rd wave was a plague which wiped out about 4 billion people world wide.  The 4th wave is where the book starts - they are in the middle of it.  The "Silencers" (aliens) hunt humans and kill them on sight.  Our hero of the story, Cassie, is on her own at the time of the start of the 4th book.  She gives us glimpses into the past - what has happened up until this point, what has happened to her family, and how she is managing to stay alive.  Cassie is alone a long time until she is wounded badly, and she meets Evan Walker.  He nurses her back to health, and offers to help her rescue her brother.  She decided to trust him even though she isn't sure he is human.

The story unfolds nicely.  It is a YA novel, but I thought it was pretty good.  We don't find out what the 5th Wave is going to be until near the end of the book (because, folks, this is a trilogy series), but things unfold during he book that helps you guess where it is going.   Cassie, the main character, is a strong female lead (and a 16 year old) whose love for her little brother keeps her from giving up.

Yes, there are mushy teenage moments, but what YA novel doesn't have that?  I don't think it took away from the story at all.  I am anxious to see where this series is going.  I think I am going to have to sneak in reading the second book even though it isn't on my challenge list.


Posted by PletcherFamily at 4:37 AM