Another book down!  This one was an easy read, so I was able to finish it quickly.

This book was  Jennifer Government 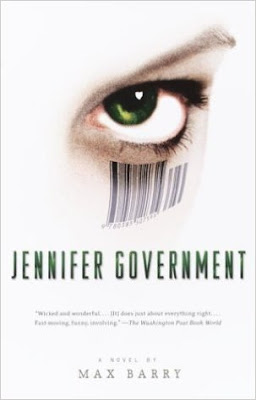 This was under the category:  A Book with a Name in the Title

This is a world where there are no more taxes and the government has been privatized.   The employees take the name of the company they work for (for example - Hayley McDonalds and John Nike) and when they change jobs, their last names change as well.  Jennifer Government, well, works for the government.  Jennifer is a single mom and a government agent who has to get funding before she can fight crime (if you want your lost loved one found, or a crime solved, you have to pay the government to do it)  In this world, the US controls not only the western hemisphere, but also Australia, England and Japan.  The plot goes from Australia to London to US and back again trying to chase a cyberterrorist and people who are manipulating the stock market.  The book represents capitalism at its worst, and how strange the world really could be.

The book was an easy read.  I found it entertaining and the names of the people in the book were humorous.  There was a little love story, and chasing bad guys, and in the end there was justice.  There were mixed reviews about it on Amazon, and I can see the points those folks make.  It moves pretty quickly, and there isn't much time for deep character development, which can leave you confused.  But mostly it was entertaining, so I say give it a try.

Stars: 4
Posted by PletcherFamily at 1:00 AM