For Book 8 I chose 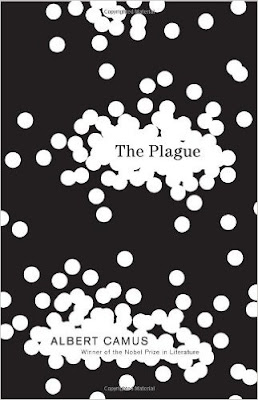 Under the category:  A Book by a Nobel Peace Prize Winning Author

This book was about a bubonic plague that struck a North African town called Oran.  The people in the town ignore the signs that what is going on is a plague until over 300 people are dying a day.  A Dr. Rieux finally convinces the town's authorities that there is definitely a problem and they gate off the town.  No one can come in and no one can come out.  Dr. Rieux has just sent his unwell wife off to a sanatorium before the plaque broke out, and now his mother - who he called to help him in his wife's absence - is in the town with him.  Dr. Rieux and several of his companions work 20 hours a day to try and help, but what really happens is they watch helplessly as 100's of people die.  In the end - not all of the main characters survive the plague, but the town does come out on the other side and opens its gates once again.

This is a pretty good book.  It took me awhile to get into it because it is intense.  I found that like some other books, I couldn't have the TV on in the background or I found myself re-reading passages several times.  It was not a difficult book, it just requires your full attention.  The main characters are great, and each of them struggles to find the meaning in the plague.  The book makes you think about what you would do if the plague to place in your own town.  Would you try your best to get past the gate and get out (like one character did)?  Would you hide?  Would you help?  These days we live in a world of immediate over reaction, that I wonder what the majority of people would do in this case.

I think it is a book worth reading.  It is an old book, but I recommend picking it up and making it one of those books you read in your lifetime.