Today I am going to review Slaughterhouse Five 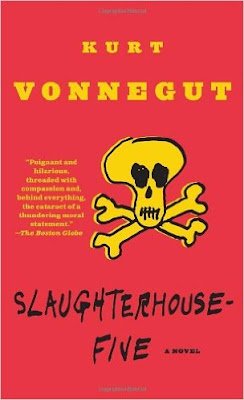 It was under the category: A Book Involving War

This book follows Billy Pilgrim - a soldier who believes he was abducted by aliens.  He believes that through these aliens he has learned to time travel forward and backward throughout his life.   Many times he travels back to World War II where he was a prisoner of war and held in slaughterhouse five in Dresden, Germany.  We learn about his life as a child, whom he married, that he became an optometrist in a successful practice, and where he was when he died.

There are many true aspects of this novel mixed in with the fiction.  The author of this book was held POW in Dresden.  Over 100,000 citizens were killed there in a bombing, and he survived as a prisoner.   The main theme of this book seems to be fate.  The author speaks of it several times.  The aliens speak of it as well.  They tell the main character, Billy, that they know how the world will end, but they will do nothing to stop it.

I thought it was a pretty great book.  Not something I would have ever picked outside of this challenge because the title - just not sure what I was going to read.  But I really liked it.  It is a pretty short book (only 215 pages), so I may re-read it again someday.  It was a great book about time, space travel, death, war, and human behavior.  I hear there is a movie, so I might give that a try.