Stranger in a Strange Land 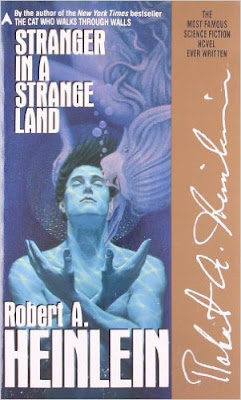 This was under the category: A  Book With An Alliteration in the Title

This is the story of Valentine Michael Smith who was born on Mars and raised by Martians (even though he is human).  He arrives on earth knowing nothing about earth at all - has never met a woman, doesn't know earth's customs or religions.  He is an heir to a large financial empire, and need to be protected.  He meets an author named Jubal, and a woman named Jill and both work to protect him.  He has miraculous abilities and eventually he leaves the protective custody of Jubal, and he and Jill venture out in the world together.  He tries to become a magician based on his abilities, but it doesn't work out, so he becomes a preacher.  He doesn't preach religion - he preaches on the Martian way of life he knows.  There is a lot of nudity, and free love with his "religion"

This book was strange.  I didn't hate it, but I didn't love it.  I did like it.  I am not a huge fan of Science Fiction novels, but have read enough now that they are starting to grow on me.  The story jumped around a bit.  Sometimes I didn't understand why they were taking the direction they were - it was choppy in spots.  There wasn't a lot of flow.  The male characters are misogynistic (which I understand for when it was written, but this is a book that takes place in the future) and they still use the Encyclopedia Britannica to get their information.  So - we have colonized Mars, but we still are using Encyclopedias?   Interesting.

I knew this book wasn't going to be great for me because it took me a long time to get through it.  I would put it off and find anything else to do besides read it.

Eh.  If you like Science Fiction - you will probably love this book.  Or have already read it.