Today's book I am reviewing is: 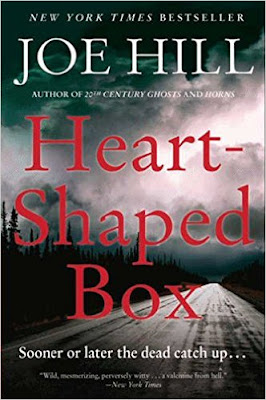 It was under the category:  Horror Book

This is the story about a rock star in his 50s who loves to collect macabre artifacts.  He buys a haunted suit online for $1000.  Jude (the rock star) thinks this is a joke, of course, but has to have it.  But it isn't a joke.  And the person that sold him the suit isn't a stranger.  The ghost appears in his house and tells Jude that he is there to kill him and anyone else he loves.  Jude calls the owner of the suit, and finds that it is the sister of the last girlfriend he had (who allegedly committed suicide).  The ghost is the step-father of the dead girlfriend, and he is out for revenge.

This was a pretty good book.  I am a fan of Joe Hill.  Being the son of Steven King, some talent from his father has rubbed off on him.  I think he ends his books better than his father......but I digress.

The book kept a steady pace of fear.  Anything about the dead that wreak havoc on the living gives me a chill.  I was reading it at night before going to bed, and quickly found that wasn't a good idea.  I also put it away for a few days while my husband was traveling.  It ALMOST ended up in the freezer.  Almost.

I say give it a try.  It stands up to Hill's other novels.

Stars: 4
Posted by PletcherFamily at 3:11 AM