Two books at once!  I finished the last review and this book in 2 days, so I figured.....why not. 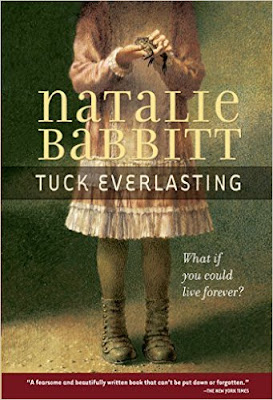 It was under the category:  A book that was turned into a musical

Did you know this was a musical?  In fact - it is a NEW musical on Broadway.  So it counts.

Tuck Everlasting is the story of the Tuck family that drank from a spring in the woods and now they can never die.  Even if they get injured, they cannot be killed.  They have hidden for the last 83 years because they do not age - they are eternally the age they were when they drank from the spring in the woods.  They meet a young girl named Winnie Foster who wanders into the part of the woods where the spring is located.  Sitting there is Jesse Tuck.  She sees what he is doing and asks about the spring.  He tells her she must never drink from it, but when she presses, he takes her to his home to explain their secret.  She does not believe them at first, but as she gets to know them, she finds that they are telling the truth.  Trouble comes when a stranger witnesses what happened at the spring and wants to profit off the water that makes a person immortal.

This book was really short.   It was decent.  I didn't like the ending one bit - wasn't expecting it.  The writing wasn't that great - very basic.  But it is for 10-14 year olds, so I guess I shouldn't expect a lot.  And I shouldn't judge too harshly because I cannot write a book.

Winnie is only 10 in this book.  The youngest Tuck is 17.  (well, really 104, but you know what I am getting at).  After knowing Winnie for 1 day, he brings her a jar of the spring water, and tells her that when she is 17 she should drink it and then they could get married and be together forever.  Uh....really?  This got turned into a movie by Disney.  Not surprising - that kind of love story is right up their ally.  A day.  And she loves this family and puts herself in danger for them after knowing them for a few days as well.  I have a 10 year old.  She would not be this trusting after 1 day - I am sure of it.

I also think that the book could have been longer and they could have stretched the story out more than a few days.  There wasn't enough time for character development and for you to really "pull" for one character or another in a 130 page book.

If you are a young kid - this is a cute book.  I say give it a try.  I will be anxious to see how the musical does on Broadway

Stars: 2
Posted by PletcherFamily at 4:45 AM