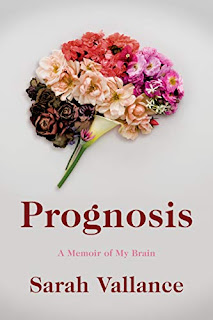 This is the true story of the author and her life after a severe head injury.  She was working on her Ph.D. when she was thrown from a horse.  Not wearing a helmet, she hit her head hard on the ground and quickly found that she was suffering from a severe concussion.  She was having trouble with simple tasks.  Short term memory was shot.  She felt angry, depressed, and frustrated.  Her IQ dropped significantly.

She spent the better part of a year trying to figure out what to do.  And then she started to rebuild her life.  She got a job, she started her Ph.D. work again.  She moved to a new country.  She found love.  And while her troubles were never far behind, she was able to regain somewhat of a normal life.  It was easy for her to hide from others what was really going on in her mind.

It has been almost 20 years since her accident, and according to her, she has hardly had any improvement.  She has atrophy in parts of her brain that constantly keep her concerned.  She has really not found the answers that she was hoping for to improve her brain function, and she doesn't know what the future holds.

This was a fair book.  I really, really don't want to judge it because it was written by someone who states her IQ is around 90, and was able to accomplish so much.  The writing isn't great, but I didn't really expect it to be.  Actually - based on what the author is going through, it was good.  The story is sad and frustrating.  She doesn't get a lot of help for her head injury, which is frustrating to the reader.  She doesn't have a lot of support, and she had a rocky childhood.  She went through several failed relationships.  At the end of the book she ends up in a permanent relationship that is still in place today.  But her mother was someone she could never please.  She came across a lot of people who didn't really understand what she was going through, and had little patience for her.

It would be a good read if you have ever known anyone who had a head injury.  What goes on behind the scenes in incredible.  They find that it is very very hard for the adult brain to bounce back after a severe injury like the one the author had.