Read The World - Nicaragua - The Country Under My Skin 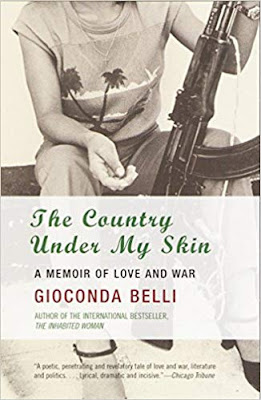 This is the memoir of the author's life in Managua, Nicaragua through the 1950s-2000s.  She grew up in a wealthy family, shielded from the poverty that surrounded her in the country.  She married early, had children, but something just didn't sit right with her.  In the 1970s she became aware of the inequalities that were surrounding her in Nicaragua.  She joined a group called the Sandinistas, a hidden organization that was working to revolutionize the country.

The book gives her account of the Revolution and those tumultuous years she spent trying to have two lives.  Her marriage fell apart.  She had to leave her children for long periods of time.  She was in constant danger.  And she did it all because of a cause she believed in.

This is a great book on a lot of levels.  First - the writing is brilliant.  She is a gifted writer and story teller, and I found myself staying up late to finish a chapter, because I was so invested in the material.   As usual - I am introduced to a place and a war that I knew little about.  I saw everything from the perspective of someone who was not only living it, but deeply involved in turning a country around after a dictatorship.  We get her views on the country itself, how it was shaped before and after the fall of the government, and her feelings about the United States involvement at that time.

The only part I had trouble with is that she did cheat on two of her three husbands.  A poet by nature, she traveled almost a vagabond life, and she often strayed.  She had children that she left for months at a time.  When she was exiled, she was separated from them for so long that she didn't think she would ever see them again.  Her committment to the change in Nicaragua came with some heavy price tags, and I was surprised where her family ranked among her responsibilities.  I will give her credit for being honest and blunt, but it was off putting.

There are a few quotes from the book that I want to leave in my review because above everything else, she wrote some very powerful words.  With everything that is happening in the United States right now, these hit home for me.

"A war can be won with any class of people, but a fair, ethical system of government cannot be put into place, if the people who take it upon themselves to do it lack those qualities, or sacrifice those values along the way."

"I can't think of a better life than one dedicated to passion, to dreams, to the stubborness that defies chaoe and disillusionment."

" The future is a construct that is shaped in the present, and that is why to be responsible to the present is the only way of taking serious responsibility for the future."