Well, life is getting in the way.  Between my adult German class two times a week, kids schedules, and general life stuff, I am not getting in the reading time I did while I was on vacation.  Shocking right?  Yeah....no

Today's review is for:  Tell No One
Author: Harlan Coben
Pages: 400 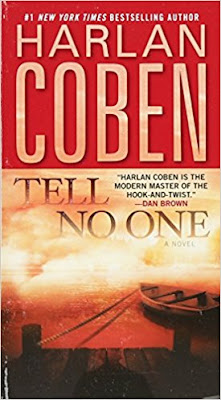 This book opens with a couple Elizabeth and David - celebrating their 13th anniversary together as a couple.  They have been together since they were little kids, so this 20 something couple is still newly married.  Each year they celebrate by going to a cabin in the woods, and putting another notch in a tree with their anniversary number.  But this year, something goes horribly wrong.  Elizabeth is kidnapped, and David is knocked unconscious.  When he wakes up in the hospital, he is told his wife has been found, dead, and that he is a suspect.  But soon, he is cleared and a serial killer is blamed.

Eight years pass, and David is still mourning Elizabeth's death.  David is now Dr. David Beck - a pediatrician in a rough area.  One night, he gets a mysterious email from someone who looks a lot like his wife.  Thus begins the race to find out to the truth.

This was a GREAT book.  I would have liked to finish it all in one sitting, but those darn kids of mine kept wanting fed and entertained.  There are a lot of characters, plot twists you don't see coming, and even the ending will surprise you.  It is well written, and not complicated to follow even though there are several angles to the same story.  I really enjoyed it and kept rooting for a win for David and Elizabeth through the whole book.

The only thing I would say would be a negative about it is - how easily David forgives his wife when he finds out the truth.  I don't want to say too much in fear of giving it away, but when you read it, you will probably understand what I mean. Or not....if you don't agree.

Check out this book.  Even though it is 400 pages, it reads quickly, and you will not want to put it down.