Some folks have asked how I am reading so fast.  Well....I live in Basel, Switzerland.  This area of Switzerland speaks German.  And all the TV and newspapers are in German.  And while I am learning the language, I am far from being able to understand it in those context.  So.....books it is.

Today's review is for:  The Namesake
Author: Jhumpa Lahiri
Pages: 291 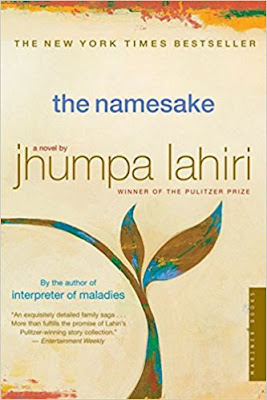 This story covers 30+ years of the life of Gogol Ganguli.  He is born in Boston, Massachusetts.  His parents had moved here shortly before he was born from Calcutta India.  His parents were an arranged marriage, and Gogol's life will be steeped in Indian tradition.  Gogol's name was only supposed to be his pet name - his parents were waiting for a letter from his great-grandmother that would contain his formal name.  But the name never arrives, and the hospital won't let the parents leave without naming the baby.  So he is named after his dad's favorite author - Nikolai Gogol.  They go home and hope that the letter will soon arrive, but it never does.  Gogol goes through his entire childhood with this name.  Once he is an adult, he decides to change his name to Nikhil - never liking Gogol.  With this new name, he attends Yale, goes to graduate school, becomes an archetict, and gets married.  By his family he is still known as Gogol, but to the rest of the world - Nikhil.

Several tragedies happen over the story, and Gogol/Nikhil comes to understand why his father named him what he did.  As a first generation American who spent years running from Indian traditions, it takes these life tragedies for him to realize what a name means.

This was a really great book.  The writing is superb, and easy to read.  The characters likable.  You keep rooting for Gogol to get what he deserves.  I really did think that somewhere along the line that letter from his great-grandmother would materialize and we would find out what his true name was going to be.  I won't lie - that eats at me.  I know it wasn't important to the story - that he was always supposed to be Gogol...but still.  The unknown has always driven me crazy.

It isn't a quick read, per say.  You would LIKE it to be.  But it is very wordy - lots of detail more than dialogue, so the pages are heavy with information.  Sometimes I wanted to skim to get on to the next point, but I quickly found that details you would want to learn were in those thick paragraphs, so I remained patient.