Read The World - United States of America - The Stand 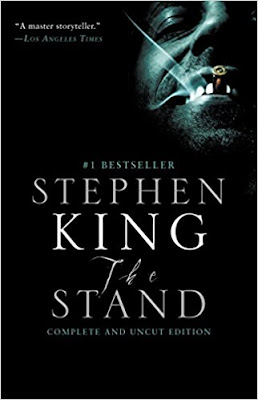 **This is my LAST- "previously read" book.  We made it.  After today, all Read the World book reviews will be of books I have read starting in 2019.  I have been reading each day while these post have been appearing, so I have quite a few books ready to go already.  But now it is time for some new material on the blog.**

Tis is a book from my 2016 challenge.  It is a beast of a book in size but remains my favorite Stephen King novel of all time.  I had read it once before my 2016 challenge, and have seen the movie several times, and my mind has never changed.  This is a terrific novel.  I chose it for my USA novel because it doesn't take place in one particular state.  I have a goal of doing a "read the states" challenge after this challenge ends, and I have plenty of books from various states for that.  So The Stand fit here.

I was born and raised in the United States, so obviously I have visited.  I have been to about 47 of the 50 states, so if you haven't explored my country - please put it on your list.  There is something for everyone across the wide country - from bustling cities to small quaint towns.

The people who remain form two groups.  One is lead by 108 year old Abigail Freeman who follows God's calling.  The others are lead by Randall Flagg who represents the devil.  These two groups people come to the remaining survivors through dreams - calling them to join them.  The people who are called by Abigail are told that there is an evil that is coming for all of them.  That they are going to have to work together to reform the country but first they must face Randall Flagg and his followers who have settled in Las Vegas (where else?)

In the end, there is a stand against evil to help restore humanity.  A main group of 4 representatives head to Las Vegas to seek Randall and his group.  They are imprisoned and sentenced to death for their stand against him.  The group calls to Abigial and to God to take them home and wipe the evil off the earth.

This is one of my favorite stories that Steven King wrote.  I try to read at least one of his big books each summer.  (this one was a whopping 1200 pages).  I have seen the TV miniseries and love it.  IT is a great story, and exactly how I imagine it would go if the population was invaded by a deadly disease and what was left were people who were good and people who weren't.