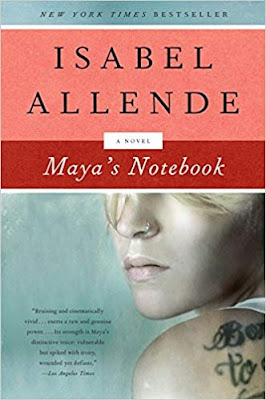 This is my 9th read for 2019 - finished 1/18/2019.  I got a lot of reading in during January. It has been cold and rainy here in Switzerland, so we are indoors a good bit.  Even though I am glad to be getting a lot of reading time, I am looking forward to seeing the sun again.

This is the story of a young girl named Maya.  She has been hidden on an island off the coast of Chilie - called Chiloe - because there are several people after her.  She had made some bad choices, fell in with the wrong crowd, and now she is on the run for her life.

Maya lived a very stable, spoiled life with two dotting grandparents who gave her everything she wanted.  She was well loved, especially by her grandfather (whom she calls Popo).  Her father, a pilot, and her mother - whom left when Maya was very young - didn't give her much of their time, so her care fell to her grandparents.

When Maya's Popo died, Maya became depressed and started to abuse drugs and alcohol.  She fell into a bad crowd at her high school in Berkeley, California and started to cut school.  She reached a low, and her father and grandmother intervened and got her into a a program.  But before the program finished, Maya ran away and thus began 6 months of bad decisions.

She ended up in Las Vegas basically homeless and running drugs for a local drug lord.  When the drug lord is murdered, Maya is sure she is next, so she disappeared.  Returned to her grandparents by some good samaritans that found her at her lowest, Maya is put through a detoxification program and then sent to her grandmother's home country of Chile to hide.

Maya's grandmother called on some favors of old friends, and Maya finds herself trapped on a small island with no communication with the outside world.  No one besides Manuel - the man who is hiding her - knows why she is on the island.  As the months go by, Maya begins to heal both physcially and emotionally.  She finds herself, and finds peace all thanks to the Chilean people who took her in.

The story goes back and forth between Maya living on the island and how she ended up there in the first place.  In the end, Maya learns the truth about her family and is able to face her demons.

This was a pretty good book.  The book does run without many chapters with the only breaks coming when a new season is starting. (Spring, Summer, etc) The book flows pretty well between past and present, but it could have been better.  Sometimes she mentioned something, but wouldn't explain it for a few pages, and you felt like you missed the set up.  But that didn't happen often enough for me to find it troubling.

I think the book held strong up until the ending which was a bit rushed.  Again - nothing overly troubling, but the author wrapped up a large part of the story in the last 10 pages that I felt could have been drawn out a little better.

All in all, a good book.  I would encourage you to try it.  Above all - I learned a lot about the country of Chile and could easily picture the beautiful island of Chiloe from the author's descriptions. 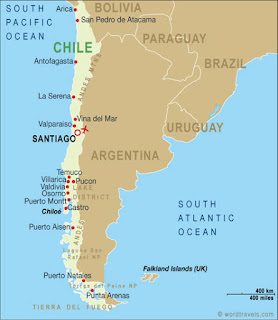