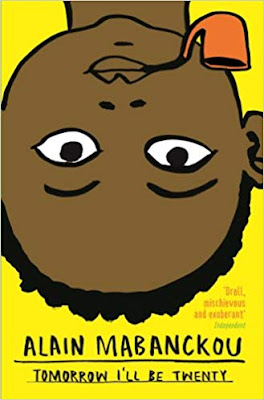 Yes, the Congo is split into two different countries, so it got two different books.  The city of Brazzaville came up a lot in this book, and I actually read a book called Brazzaville Beach a few years ago that was very good.  I could have used it for my book for this country, but I am glad I read something new.

This is the story of a 10 year old boy named Michel who lives in Pointe Noir, Congo.   The book takes place in the 1970s.  His mother sells peanuts in the market and his dad works at a hotel at the reservations desk.  His dad is not his biological father, but what he calls a "foster father".  Michel's foster father also has another wife and seven other children (which apparently is not uncommon there).  Everyone gets along well.  Michel's mom would like to have more children.  She had two baby girls that both died at birth before Michel came along.  She and Michel's foster dad visit "witch doctors" who tell his mom that it is Michel's fault she cannot have children - that he needs to find a key to unlock her belly so she can have more.

When Michel is not seaching for the key, he spends time with a little girl named Caroline that he is completely in love with and says he will marry some day.  His best friend is Caroline's brother and they spend hours watching planes fly over their city and guessing where they go.  Michel is a fine student - middle of the road - and wishes he could get better so he could go on to a fancier school when he gets older.

It is a day in the life tale of a little boy - spending time with his friends and family in the heart of the Democratic Congo and him learning about the immediate world around him as well as the outside world (his father loves to listen to American radio which reports on the politics of the world).  He keeps looking forward to being twenty years old - feeling THAT is when he will be old enough to do whatever he wants.  Hence....the name of the book.

This was a pretty good read.  Knowing from the beginning it would be basically a "stream of consciousness" of a 10 year old boy, you knew it wouldn't contain a lot of depth.  It is fun to see his understand of the world from his point of view.  He and Caroline (also his age) get married and divorced (in little kid imaginary play) and he is devestated when she leaves him for another boy.  He is doded on by his brothers and sisters from his foster father's other wife, and worries about his mother's need to have another child.  He understands very little and even his parents  - whom are not well educated - believe in the working of the spirit world and witch doctors when it comes to many things.  It made the story interesting.

I encourage you to try this book.  It is not well known, but the book that came up over and over when I searched for "books from the Congo".  So give it a try.  I borrowed it easily from our ebook library.