Book: Whiteman
Author: Tony D'Souza
Pages: 294
The book takes place in the country: YES
The author is from the country: NO
I have visited: NO 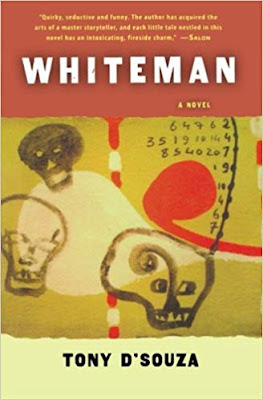 This is another one of those countries where there isn't much written.  It was hard to chose among the few books I found - none being something I would chose on a regular reading year.  However - that is part of the point, is it not?  Find things I wouldn't normally find?

This fictional story (though told as if it was non-fiction) is about a man named Jack who is on a mission trip to bring water to the Ivory Coast area of Africa.  This is at a time where Christians and Muslims are at war, and the area is very dangerous.  Jack - a white man from America - sticks out like a sore thumb right from the beginning, but he quickly becomes loved by the people in his village.  He works hard to learn the language and gain the respect of his community.

During his years in the village Jack learns to live on his meager earnings, hunt, and survive the jungle.  He lives among those who believe in witchcraft and the power of telling stories.  He falls in love with African girls over and over.  And in the end, when it is time for him to head home, he is afraid to leave.

This story is my first read of this year that I am just not sure should have a spot on my shelf.  It is a fine story - entertaining for the most part, and I loved some of the stories that were told.  I also enjoyed the types of witchcraft that were described, and what a lot of the people in the village believed about white men.  It is a little vulgar in areas (quite a bit of sex) but I am a bit of a prude when it comes to that in a book, so it might not bother you.  I felt it a little careless on the part of our main character whom I felt should know better.  But...who am I to judge.

If you are looking for a Ivory Coast novel in a Read The World challenge (or just for the heck of it), you might want to try this one.  I was able to borrow it from my local library's ebook catalog, so no harm done.