Read The World - Sudan - What is the What

Book: What is the What
Author: Dave Eggers
Pages: 538
Book Takes Place in the country: YES
Author is from the country: NO
I have visited: NO 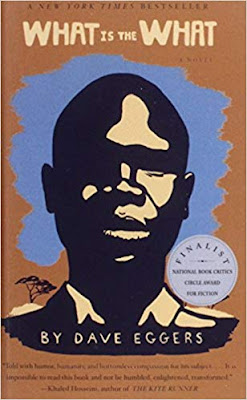 This is my 46th read of this year.

I listened to this one as an audiobook.  I have listened to a few audiobooks this year, and this was one of those where I was completely captivated.  I say this because I am going to break a rule with this book and leave it as my Sudan book.  It only takes place in the Sudan for about 30% of the book, but I liked this book and the story of these Sudanese man, that it stays.  Plus - this was 20 hours of listening that I am not forfeiting.

This is the story of a real person named Valentino Achak Deng.  He was one of the Lost Boys of Sudan.  When Achak was a boy, the Civil War wipes out his Dinka village called Marial Bai.  The militia attacks his town and Achak flees with other boys and fears that he will never see his family again.

The boys become "The Lost Boys" who walk from Sudan to Ethiopia to a refugee camp.  They experience danger and hardship along the way, and a lot of boys die.  They keep going on the promise that when they get to Ethiopia there will be houses and food and school.  But when they arrive the conditions of the camp are depolorable.  They are not there long before they are forced to move on when soldiers open fire on them.  They flee to another camp in Kenya where Achak spends many years.  He grows up in a camp called Khartoum.  There he actually gets reunited with some of his friends from Dinka.  He goes to school, makes friends, and hopes that someday he can return home and find his family that he hopes is still alive.

The book goes back and forth from when Valentino (Achak's name he takes when he moves to the United States) is in the United States and has just been a victim of a robbery, to his time in the Sudan and part of the Lost Boys.  He talks to people in his present about things they could never imagine about his past.  How far he has come and what he has survived is like nothing they have ever seen.

This book was fantastic.  The story telling was superb, the narrator (Dion Graham) did an excellent reading, and the story something you need to read.  What Valentino and the Lost Boys and Girls survived was a story everyone should know.

Valentino does the preface for this book and does state that he told his story to the author and then gave the author the go ahead to add to the story as he sees fit.  It is known right from the beginning that this book was full of facts about Valentino's life, but with added embellishments from the author.

So good.  From start to finish this book was large, but amazing.  Add it to your list.