Read The World - Nigeria - Half of a Yellow Sun 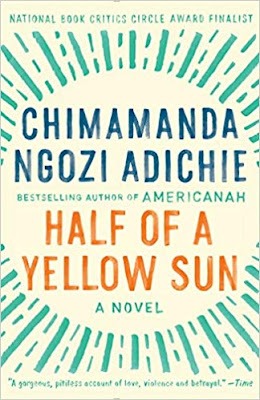 This is my 67th book for the year

I did listen to this book.  Passed the time on the tram and while I did my groceries, and while I worked in the yard......  It is nice to get in another book off my very extensive list when otherwise I wouldn't be able to read.

This book takes place in southern Nigeria in the 1960s.  There are 5 main characters: Ugwu - a house boy who works for Odenigbo (a professor).  His life changes when Olana,  Odenigbo's mistress, moves in.  Ugwu is very loyal to his employers.  Olanna has a twin sister, Kainene who runs their father's company.  She falls in love with Richard, who is an Englishman that came to Nigeria to explore Igbo-Ukwu Art.

4 years pass, and trouble starts between the Hausa and Igbo people and hundreds of people die, including Ilanna and Kainene's aunt and uncle.  A new republic, called Biafra, is created by the Igbo.  Olanna, Odenigbo and their infant daughter (whom they only ever call "baby") are forced to flee and end up in a refugee town called Umuahia where they suffer from lack of food, and air raids.  Baby's hair starts to fall out and she develops the tale tell signs of starvation.

In a flash back we find out that the baby was not Olanna's daughter, but the daughter of Odenigbo's mistress.  Odenigbo slept with a village girl named Alana and she got pregnant.  Olanna is furious, but in the end, forgives Odenigbo.  Alana doesn't want to keep the baby, so Olanna agrees to take her in.

As the war goes on, Olanna, Odenigbo, the baby, an Ugwu end up living with Richard and Kainene (who are running the refugee camp).  The situation becomes dire and Kainene decides to cross enemy lines to trade, but she doesn't return.  The book ends with us not knowif if Kainene is alive or dea.

This was a good book.  I liked all of the characters and I thought that their enterwining flowed really well.  You learn a lot about the history of the area and what it was like during the war.  It covers a wide variety of subjects: genocide, war, relationships, infidelity, identity, loyalty, struggle between classes, etc.

Check this book out.  You won't be disappointed.  And there is a movie as well!